The Island Where People Forget to Die

Is it their diet which includes plenty of olive oil, wine and “mountain tea”? Is it their sleep and sex habits? Or, as one 101-year-old Ikarian woman put it with a shrug, perhaps they “just forget to die.” 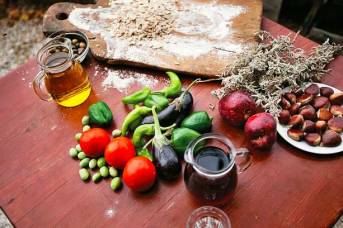 From The Island Where People Forget to Die by Dan Buettner in the New York Times.

“As I knew from my studies in other places with high numbers of very old people, every one of the Ikarians’ dietary tendencies had been linked to increased life spans: low intake of saturated fats from meat and dairy was associated with lower risk of heart disease; olive oil — especially unheated — reduced bad cholesterol and raised good cholesterol. Goat’s milk contained serotonin-boosting tryptophan and was easily digestible for older people. Some wild greens had 10 times as many antioxidants as red wine. Wine — in moderation — had been shown to be good for you if consumed as part of a Mediterranean diet, because it prompts the body to absorb more flavonoids, a type of antioxidant. And coffee, once said to stunt growth, was now associated with lower rates of diabetes, heart disease and, for some, Parkinson’s. Local sourdough bread might actually reduce a meal’s glycemic load. You could even argue that potatoes contributed heart-healthy potassium, vitamin B6 and fiber to the Ikarian diet. Another health factor at work might be the unprocessed nature of the food they consume: as Trichopoulou observed, because islanders eat greens from their gardens and fields, they consume fewer pesticides and more nutrients. She estimated that the Ikarian diet, compared with the standard American diet, might yield up to four additional years of life expectancy.”

Category : ABOUT BALLARAT WELLNESS & 7 BODY-BRAIN BOOSTERS, CHANGE IT, DEFEND IT, ENGAGE IT, FEED IT, KNOW IT, MANAGE IT, MOVE IT
Tags : ballarat, ballarat wellness, greek

← Metabolic Syndrome: Prevention and Treatment
Movie It Like a Pro →